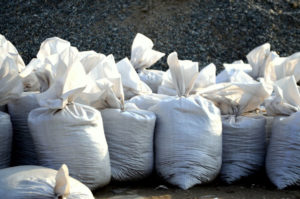 WHAT IS A SANDBAG AND WHAT IS ITS PURPOSE?

A sandbag is a sack made of burlap or woven polypropylene that is filled with sand or soil and used for such purposes as flood control and military fortification. Sand bags are an excellent choice for the construction of levees, berms, dikes and barricades for erosion control, flood walls, and traffic control. Sandbags may be used during emergencies when rivers threaten to over-flood, or a levee or dike is damaged. Quick action and bags on-hand could save countless dollars in personal and property damage.

WHEN CAN SANDBAGS BE USED?

The use of sandbags is a simple, but effective way to prevent or reduce flood water damage. Properly filled and placed sandbags can act as a barrier to divert moving water around, instead of through, buildings. Sandbag construction does not guarantee a water-tight seal, but is satisfactory for use in most situations. Sandbags are also used successfully to prevent overtopping of streams with levees, and for training current flows to specific areas.

Sandbags alone should not be relied on to keep water outside a building. Use baffle boards (plywood sheeting) or sheets of plastic tarp with sandbags. To form a sandbag wall, place bags tightly against one another to form the first layer of defense. Stagger the second and subsequent layers of bags, much like the pattern of bricks in a wall.

Sandbags, when properly filled and placed, will redirect storm and debris flows away from property improvements.

WHAT ARE THE DIFFERENT TYPES OF SANDBAGS?

WHAT SIZE BAGS WORK BEST FOR PRIVATE RESIDENCES AND BUSINESSES?

Use bags about 14-18″ wide, and 30-36″ deep. Sandbags should be filled half full for easy stacking and will weigh approximately 30 pounds. Thirty sandbags are equal to approximately ½ ton (one ton is 2000 pounds) and is the maximum legal load limit for a ½ ton truck.

HOW CAN I FIGURE OUT HOW MANY SANDBAGS I NEED?

HOW FULL SHOULD THE BAG BE FILLED?

Bags should be filled between one-third (1/3) to one-half (1/2) of their capacity. This keeps the bag from getting too heavy, and permits the bags to be stacked with a good seal.

WHAT MATERIAL SHOULD BE USED TO FILL THE SANDBAGS?

A heavy bodied or sandy soil is most desirable for filling sandbags, but any usable material at or near the site has definite advantages. Coarse sand could leak out through the weave in the bag. To prevent this, double bag the material. Gravelly or rocky soils are generally poor choices because of their permeability. Filled bags of earth material will deteriorate quickly.

HOW MANY PEOPLE DOES IT TAKE TO FILL SANDBAGS?

Sandbag barriers can easily be constructed by two people, as most individuals have the physical capability to carry or drag a sandbag weighing approximately 30 pounds.

WHAT IS THE BEST METHOD TO USE TO FILL SANDBAGS?

It is recommended to use a two-person operation to fill sandbags. Both people should be wearing gloves to protect their hands. One member of the team should place the empty bag between or slightly in front of widespread feet with arms extended. The throat of the bag is folded to form a collar, and held with the hands in a position that will enable the other team member to empty a rounded shovel full of material into the open end.

The person holding the sack should be standing with knees slightly flexed, and head and face as far away from the shovel as possible. The shoveler should carefully release the rounded shovel full of soil into the throat of the bag. Haste in this operation can result in undue spillage and added work. The use of safety goggles and gloves is desirable, and sometimes necessary.

WHY DO YOU SOMETIMES TIE THE SANDBAGS AND OTHER TIMES DON’T?

WHAT IS THE HEIGHT LIMIT TO STACK SANDBAGS SAFELY?

Limit placement to three layers, unless a building is used as a backing or sandbags are placed in a pyramid.

HOW DO YOU STACK SANDBAGS?

HOW DO YOU DISPOSE OF SANDBAGS AFTER THEIR USE?

Before disposing of used sandbags, check for contamination. Sandbags exposed to contaminated floodwaters may pose an environmental hazard and require special handling.